This is the story of a friendly cat named Pickles who caused a rift between neighbors then learned to change his behavior and help them mend fences.  The situation had been escalating for some time when his person contacted me for a session: 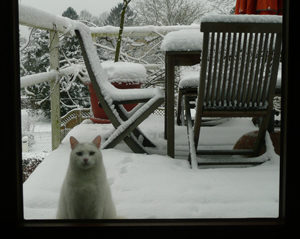 “Last summer our cat Pickles began going up on our neighbour’s porch and ‘bothering’ her cat Lily.  He seems to just want to be friends, but Lily hates other cats and spits and hisses at him.  Then he started turning on her motion lights on all night long.  She doesn’t want him coming over and we’ve looked into all sorts of repellents and ultrasonic devices but nothing is satisfactory for various reasons.

Yesterday, my husband severed our friendship with her.

Is there any way you could talk to Pickles and tell him to stay off her porch?”

Pickles’ side of the story

When I contacted Pickles for our session, his personality immediately came through as happy, sunny, friendly.  He knew before I told him that the reason for our talk is the lady next door doesn’t like him going over.  He has a detailed understanding of the issue.  He told me he understands the meaning of the neighbor’s body language when she tells him to go.  He knows exactly where to step to turn on the motion lights – or to avoid doing so, if he chooses.  He’s even aware of the tensions his behavior caused between the two families.

He feels his own family can’t make sense of his behavior, that they think he’s so sweet, what reason would he have for bothering anyone?  Pickles says “I don’t want to be disagreeable.  Everyone’s such a downer” about this situation.  He’s confused why his behavior is perceived as negative.  In his view the people are making a problem where he doesn’t see one.

As he continued describing the situation from his point of view, it became apparent Pickles truly meant no harm.  He adores the other cat and wants to be her friend.  However, he was not recognizing that his persistence was making her unhappy.

He had thought it over and is sure the cause for all this trouble is that the neighbor lady just does not understand him and his intentions.  Her attitude confuses him, he feels, “She doesn’t know who I am, what I’m about” and if only she did see how nice and friendly he is, she’d want him there.  Partly he continues to go there in order to show her he’s nice.

Pickles wasn’t any happier than any of the people about the upheaval. He wanted a solution too.

He had even come up with his own theory for what would help and had tried to solve the problem in his own way: He was sure that if he was extra-friendly and went over to visit more often, he could change their minds.

Pickles feels strongly that each of us should be able to choose our own friends.  When he perceived people were trying to prevent the friendship from developing, he consciously pushed back against that feeling of being unwelcome.

Unfortunately, his attempts at reaching out had only made matters worse.

A big part of my role as a professional animal communicator is to counsel and guide pets to help them learn and grow so they can make better choices.   In helping Pickles, I first considered what he had said, his motivations, desires and needs.  I helped him see where his logic had led him the wrong direction and why his behavior was not having the outcome he intended.  I helped him see from Lily’s perspective and asked him to respect her wishes to stay out of her territory.  “But I’m special!” he exclaims in frustration.  It’s so hard for Pickles to understand why anyone would not want to be his friend.

He is so sweet-natured he can’t even understand why Lily would want other cats to leave her yard.  We talked of possible reasons why it might be important for her to be the only cat and have her space.  He seemed to get that, then feels a little sad because he wishes she would come out and follow him around, maybe come to his yard with him and hang out.  “I want to welcome her into my yard.”

We discussed the importance of respecting others’ wishes instead of forcing a friendship.  That if he cares for Lily and her people, he could show his kindness towards them by helping them to feel calm – which he can do by staying off the porch and avoiding the part of the yard that trips the motion sensor lights.

Pickles had a dilemma.  He was reluctant to walk away from his potential friend, but he was now able to look at the situation from a new perspective and understood how his behavior was actually hurting her.  He began to re-think his behavior.

It was important to let him decide what changes he was willing to make and guide him as he brainstormed.  First Pickles tried to work out a compromise.  He asked if it would be ok if he sat on the neighbor’s porch steps without going on the porch itself.  I let him know that’s too close.  “I thought so.”  His next idea is to “walk through their yard with my back to them”, ignoring them, not trying to interact.    We agreed that would be acceptable.

He also suggests that maybe instead of continuing to try helping the unappreciative neighbor, “I’ll catch mice and let Mom know!”  In this way, “I can be helpful to other people”.  He decides it’s the neighbor’s loss that he won’t be visiting with her and her cat anymore.

He went on to show he’ll try to keep his focus more at home and with his family rather than trying to reach out to make new friends with the neighbor and Lily.  He thinks his family will appreciate this new helpful attitude of his.  He likes to be friendly and helpful – first making friends with someone, then finding ways to help them.  It’s a two-step process.  Pickles said he will do his best, because he wants to make his mom happy and “help her have more relaxation”.

As we ended our session, Pickles was thinking over what he’d learned, weighing the pros and cons of his options.  I thought we had make good progress but Pickles wasn’t ready to entirely abandon his idea of friendship with Lily.  It’s hard for him to accept because “I picked her”.  He’s so attached to this idea.  I suggested he and Lily communicate telepathically and he can try to develop their friendship that way.  Then Lily can still support her mom, and be not threatened by a cat’s physical presence, and both cats can have a friend.  He says he hadn’t thought of that, he’ll consider it.  He’s determined to keep trying to work this out. “The situation warrants more friendship-making.”

I wasn’t sure what he would ultimately decide to do with his free will.

About a week later I received an update from his person, in part:

“What you do is incredible.  Pickles has been a different cat from the day you talked with him.  He told you he’d focus on staying at home more, and he’s doing exactly that… I’m confident he won’t bother the neighbour again.“

She sent a further update about 6 months later:

“Now that summer is here once again, I am totally amazed that he now spends at least eighty percent of his time in his own yard.  Last summer it was pretty much zero… It’s a complete turnaround for him and it’s truly amazing.  I am filled with gratitude.”

“By the way, we have resumed our friendship with the neighbour!”

Even the most loving and good-natured pets can become misguided and require behavior modification at times.  Providing additional information and support helps them to learn and grow and ultimately make better choices.  Sometimes a good heart-to-heart talk is just what they need.