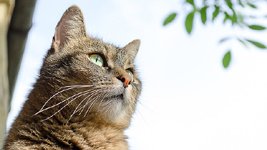 Daydream: Pleasant thoughts about your life or future that you have when you’re awake, such as a reverie, a fantasy, a muse, a pleasant wish or scheme unlikely to be fulfilled

Pets daydream in the same ways we do and derive the same pleasure from it. Subjects include idealized views of their world, pleasant reviews of their day, wishes to act in ways their bodies don’t allow, as well as pure fantasy.

When talking with them for this article, I found some pets were familiar with the term and some weren’t. One dog asks, is it “like when you have your head full of ideas you can’t have?” He shows about 10 different ideas of activities he’s like to do/choices in his head all at once, jumbled together. Another says “I have them in my head all the time. They make me laugh, or sad… They’re all my own, my own making. The things I did, dig in dirt, the playing I did in the yard, the cars I saw, the kids… It’s all mine, all my own. I make them up in my head.”

Even the black squirrel visiting the bird feeder today has daydreams, though he says he doesn’t have much time for that. At the end of the day when he’s up in a tree resting, he thinks back on his day. “What I did today, is that a daydream?” Those thoughts aren’t always pleasant, sometimes he reflects on scary events that occurred such as being chased. I read him the definition and he realizes that yes, “There IS a pleasant scheme I have, a master plan…” He thinks of it often through the year. It involves nuts, hoarding for fall. “I dream of putting them away” – having a giant hoard of nuts, shown as a large pile about 10’ tall and wide. He dreams of adding yet one more to the pile and is filled with delight.

During winter he daydreams of “taking my walk in the spring air”, slowly wandering on grass, feeling the warm sunshine. There’s no rush as in the winter to do food runs and return to shelter quickly.   Another favorite fantasy is sharing food with the larger gray squirrels who normally chase him away. He envisions many squirrels of different types all together, feeding, cooperating, and being friendly to each other.

There were some common daydream themes among the pets. A favorite mentioned by many cats is an obvious one – finding more mice! The wish they were easy to find whenever they wanted. One describes fantasizing of having about 6 mice all within arm’s reach. He can easily reach out and touch them all to ‘play’ with them and they never run away.

Another theme is of being in different places outdoors, farther than the cat is allowed to go. One cat imagines herself in a neighbor’s yard, then instantly pops over to another yard on the next street and so on. “My head moves all around”, her thoughts move her to the various locations and she imagines the space so vividly she feels like she’s actually there.

Other daydreams the cats described:

The dogs I spoke with had equally diverse daydreams:

For one very creative dog daydreams are “My virtual world.” She has quite a few recent favorites:

The dogs’ favorite daydreams were of “Dog food and naps.” They must get tired and hungry with all that virtual exploring!

email
« Next: Methods matter
Previous: What do pets dream about? »