Fetch! Fetch? New housemates try to understand each other 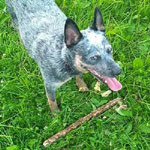 Abby is a recently-adopted Blue Heeler still settling in to her household. Her new family discovered she loves playing non-stop fetch with her stick. As they threw the stick and Abby raced to retrieve it over and over again, they saw their two 6-month-old kittens, Frankie and Baby, were watching intently from the window as the game continued for over an hour. Their mom asked me what the animals thought of it all.

THE DOG’S POVWhy is it so fun to play fetch?
“It’s fun to catch it then make them throw it again. Because I like to run like the wind! Catching is fun”, more fun than running without retrieving. “It gives me something to think about.”

Why do you prefer sticks as toys?
It’s the shape. “I like to hold it like a barrel in my mouth. Balls fall down sometime”, they’re harder to hold while running, they tend to slip out of her mouth. “It’s fun also holding it between your paws”, simply playing with a stick while resting, chewing it, etc. She thinks it’s the most fun toy there is!

Do you also like to play with balls?
“Oh yeah, when they roll. But I’m not a fall-down dog” meaning she likes to know she won’t fall therefore she prefers sticks for fetch and running. Balls are fun for shorter distance play or goofing off in the house.

Were you aware the kittens were watching you? Did you pick up their thoughts?
Yes, she was aware. “They like to watch me. They think I’m weird” (with a grin) one cat especially. Abby doesn’t agree, she thinks “I’m just different from them. Cats like to play more normal ways, like mice” and hunting games. A good thing about where she lives now is “you get to pick your preference”, each animal in the house is allowed to choose the way it likes to play and that’s ok, they don’t judge each other.

Do you think cats like to run the way you do?
“No…when they run they like to ‘hamper’ ” which she shows is hop, run a few steps, and tumble a bit.

THE KITTENS’ POVWhat were you thinking as you watched the dog play fetch?
They both enjoyed watching and trying to figure her out. They did feel a little left out also, they knew it was special to get so much person-time.Frankie wondered “Do we get one too?” (a special stick toy). Baby thought: “I don’t want one of those, they’re yucky”, sticks taste bad.
Frankie: “We want to play too. “

Baby: “But we don’t know how”, that game is unfamiliar to her, she doesn’t understand the purpose of so much running.

What do you think of the way the dog plays?
Baby is perplexed, she feels that’s not a game, that’s not how play is done. “It’s just WRONG to do that.”

Frankie says laughing, “I never ran so fast in my life!” He’s never run as fast or for so long as Abby was running. He thinks it’s a little crazy that she can do it.

Both say “We want to meet her”, go to her immediately after the game to learn what she smelled like after all that running. They think if they can smell her they can get clues that will help them comprehend or make sense of her ‘odd’ behavior.

The dog noticed you watching her. Did you pick up on her thoughts?
Yes, Abby was saying to them, “Why don’t you come down here and play too! I WANT you to!” Her attitude was the more the merrier, anyone can join in.

Baby decides “We want to be more like her”, enjoying free spontaneous play.

It sounds like they’re off to a good start becoming friends!

email
« Next: A kitten chooses his new name
Previous: FAQ: I want to have an animal communication session but I don’t know what questions to ask my animals! »